B
B.T.G.
So far so good, but shipping error (Verified Amazon Review)

Product works great with Apple XR wireless. However, I ordered a white version, but was shipped a black version. Not a huge problem, product still works fine.....Maybe I will spray paint it.....

Does everything it advertises... charged it 1 haven't drained it yet in whole month! very convenient.

J
J.
Awesome all in one charger (Verified Amazon Review)

This charger is fantastic for plugging in your phone or even taking with you. The built in wireless charging is great to use on the go and the rubber ring helps keep your phone on it just right while charging. Plenty of battery life to fully charge my phone twice and more also!

D
D.x.
I charge all my stuff with this (Verified Amazon Review)

I wasn’t really sure if I was going to use something like this but my brother convinced me with all the mobile that I do that this would be very usufully. I mean this charger chargers pretty fast and with the addition of the usbc port this charger is a must have for anyone who travels or overall needs to charge their gadgets really fast. It has tons of specs that I am yet to learn but it was pretty easy to use.

K
K.m.D.j.
Great all in one product and super convenient (Verified Amazon Review)

This portable wireless charger is AMAZING! I knew I would get some use out of it as I am always looking for either a portable battery or a wall plug. This one item sort of combines both. I didnt expect I would be using it daily as I have. It is pretty powerful with a 8000mah battery. I have honestly never seen anything quite like this as most of my chargers do not plug directly into the wall usually I have to dig out a cord and a charging box so this is super convenient. I have a Samsung note 10+ phone so it is qi wirless equiped so I can literally just rest my phone on this charger and it charges. It really doesnt get much easier than that. A nice option for some may be that it can be used globally. I am not much of a traveler so that isnt much of a benefit to me but it is neat to have as you never know. It is sized well as it isnt to bulky to carry around if you needed to. I really like that you can plug anything into it that is powered with a usb and you will have power anywhere. This is a great purchase to have on hand to use daily or incase of an emergency. 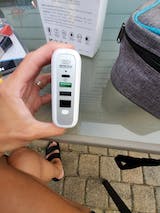